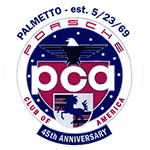 Our 45th Anniversary Party will be on August 16th at the Sandcastle on Kiawah Island overlooking the ocean. We will be honoring Palmetto's past presidents and there will be a guest speaker for this year's event. There will also be an optional self-serve gimmick rally leading up to the social hour.

Join us at Harbor Breeze in Mt Pleasant for updates from the officers, to talk about upcoming events, and to socialize with your fellow Porschephiles. Directions are here...

The May Social will be Tuesday, May 13 at Baker Motors.  Remember to build out your Macan S and bring the build # to Baker to put in the drawing to be the Club Macan! You can build your Macan at the Porsche Website here, and in Step 4 click the Generate Porsche Code button. You just have to keep it under $70k.

This year's Veterans Victory House Car Show will be on Saturday May 8th. Everyone is encouraged to attend as this is a charity event for the Veterans of the Victory House nursing home.

On May 18th we will be having our Beach BBQ event again at Huntington Beach State Park in Murrells Inlet with the Myrtle Beach and Charleston area groups.

Join us at Oscars of Summerville for updates from the officers, to talk about upcoming events, and to socialize with your fellow Porschephiles. Directions are here...

Hey Porsche friends! It will soon be time for Trident Technical College's annual car show –The Spring Spin Off. As Vice-chair of the Automotive Advisory Board and Chairman for the car show committee, I would like to say thanks to all who have made our club a noticeable presence in the show the last few years.

Charleston Drive and Dine with the Hurricane Region - April 13th

On Sunday, April 13, we will have a drive and dine with friends from the Hurricane Region PCA that will be in Charleston for the weekend.

Drive and Dine to Harold's Country Club with the Coastal Empire Region PCA on March 15th. It's steak night at Harold's!

The first Myrtle Beach event will this Sunday, February 16th. We will be meeting in the parking lot of Ollie’s Bargain Outlet in Carolina Forest, 2100 Oakheart Road, Myrtle Beach 29579 at 11:30. We will socialize a little and at noon head into the heart of Myrtle Beach and “Cruise the Strip” to 2nd Avenue Pier Restaurant for lunch. I know that we are currently under a winter weather advisory, but the weather is supposed to be much nicer for the drive on Sunday. It may still be a little chilly to sit out on the deck for lunch, but the dining room offers some beautiful views of the beach. The off season is great time to experience some great food at the beach without having to deal with the summer tourists.  http://secondavenuepier.com/restaurant/

Join us at Gilligan's (John's Island - Main Road near Hwy 17) for updates from the officers, to talk about upcoming events, and to socialize with your fellow Porschephiles. Directions are here...

Join us at Red's Ice House (Shem Creek) for updates from the officers, to talk about upcoming events, and to socialize with your fellow Porschephiles. Directions are here...

The Coastal Empire Region PCA and Bob Woodman Tires have invited us to join a BBQ social to learn about Driver's Education Events.  Full information can be found here:  http://www.pcapalmetto.org/palmettoforum/viewtopic.php?f=2&t=329

We have our tentative schedule for 2014 published in our calendar now. Below is a listing of all the events to date, check back in for any updates as I'm sure there will be more events to come.